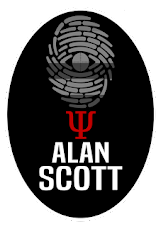 Alan Scott was born and raised in western Oklahoma where he attended college. Later, he moved to north Texas where he obtained his doctorate in analytical chemistry. He now lives with his husband and Boston Terrier in Florida.

He is an avid reader and, after reading his first Agatha Christie novel, mysteries have been one of his biggest enjoyments. He has always enjoyed reading comic books and loves the superhero genre as much.

When did you decide you wanted to be a writer and what inspired you to start writing?

I had read many books by authors who were, for example, a physics professor for thirty years and now writes full-time, or an accountant for forty years and now writes full-time.  And I thought I could write mysteries that were as good as ones they wrote.  While on an Alaskan cruise, I came up with an idea for a mystery set on a cruise ship.  I told my husband about it and he said "Just write the damn thing!"

That was about 2006 and my hobby just grew from there.

I have always enjoyed the mystery genre, paranormal abilities like telekinesis, and super-heroes, so why not join the three?  It has been an inkling in my mind for years and years, but it wasn't until "Inside Passage to Murder" that things started coming together.

What do you find most enjoyable about writing?

Sometimes I get to research fascinating subjects like the aftermath of Hurricane Katrina, the global diamond industry, and the attack on Pearl Harbor December 7, 1941.  I learn so much when researching those topics, and I think it does add another element of realism to my stories.

Which of your own books is your favorite and why?

This is like choosing one of your own children as your favorite.  I'm going to say "A Faire Day for Murder".  Ian Houston is the first Psionic Corps character I created, and he is the perfect guy.  Handsome, long blonde hair, muscular, an Okie, and can control the weather.  What's not to like?  LOL  I started writing Faire Day before Inside Passage, because it is set in a renaissance festival.  I performed at renaissance festivals for years, so it was one book I didn't have to do a lot of research for.

What is the most unusual topic you have had to research for a book?

Probably the diamond industry.  I learned how diamonds are evaluated and the process of selecting diamonds. At the time De Beers was the global giant in the industry but their lead has been waning in recent years, and they are no longer the powerhouse they once were.

What would you like readers to take away from your Psionic Corps series?

I want them to say "I had fun reading that novel, and I want to read another one."  I like telling stories that are fun.  Nothing philosophical or deep.  This isn't classic literature, and I'm not about to win any Pulitzer or Nobel prizes.  I want people to enjoy reading my novels.

Inside Passage to Murder
A Psionic Corps Mystery
Book 1