Inside Passage to Murder by Alan Scott 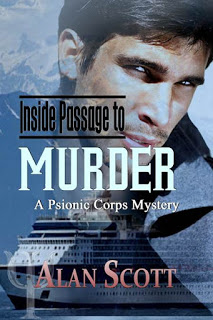 INSIDE PASSAGE TO MURDER
A Psionic Corps Mystery
Book 1

Paranormal sleuth Mark Shotridge has a dream that indicates a cruise ship operating in Alaskan waters is in trouble. He books passage on the ship to investigate his vision. After leaving Seward the first night at sea, Mark has another vision that suggests someone has been thrown overboard into the icy waters of the north Pacific. However, nobody is reported missing and Mark begins to question his special abilities.Soon, a crew member is found murdered in his cabin, and Mark is certain that there is more going on than he originally suspected. The body count rises, and he realizes that a serial killer might be on board but what is the reason behind the murders?Mark must use all of his powers to stop a ruthless killer before the ship docks in Vancouver, British Columbia. Otherwise the tourism industry and the economy of Alaska may be destroyed.