The Dragon and His Houseboy by Crymsyn Hart 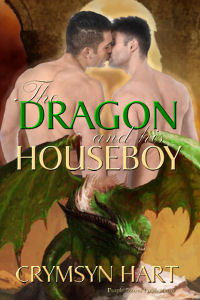 Saeran’s dreamed about retiring from his lifestyle as a male prostitute for a while. But would catering to a dragon shifter be the best thing? Dragons are known to bite now and again.

Barro is enamored with Saeran and his luscious body. Inviting Saeran back to his house to be at his beck and call seemed the logical thing to do at the time. When Saeran accepts, he is overjoyed and can’t fight the growing attraction between them.

Saeran becomes more to Barro than the houseboy he originally planned on. The question is, what exactly is Saeran becoming? They open their hearts to one another, and all secrets are revealed.