The Dragon and His Houseboy 2 by Crymsyn Hart 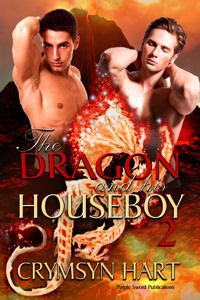 Wyr is a dragon hybrid who has been alone for over a hundred years and an outcast among his own kind. When mistaken identity makes him the priest for a local village, he takes up residence in a cave within a volcano. While he gives advice to the town, he keeps his true heritage hidden.

Tahan is the son of a local merchant with an arranged marriage looming over his head. He wants nothing of his father’s business or the marriage. Instead, Tahan has a few secrets of his own and has eyes for the village priest. Tahan admits he knows the priest’s secret only to face his anger, but when Tahan touches him Wyr realizes his true affections for the man.

In order to save the man he loves from the volcanic eruption, Wyr must reveal his true nature. By doing so, his existence is threatened. Still he would do anything to make Tahan happy and see him safe. Even give up his life.