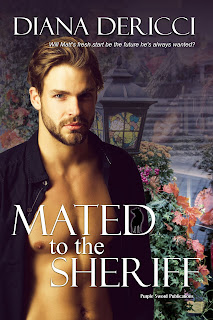 MATED TO THE SHERIFF

Matt is starting over.

Matt Landon is moving from New York to Silo to start over. After escaping an abusive relationship, his only thought is a quiet place to heal. His scars run deep and all he wants is a chance to regroup and privately lick his wounds as he takes time to put his life back together

Silo isn’t like New York. People know your name in Silo. People care. And most of all, they support each other as Matt quickly finds out when he begins to make friends through his ex-turned-best friend Peyton, and his family. Friends who will help in any way they can, which include being introduced to the local sheriff’s department personally.

No one could have prepared him for one sheriff in particular, Dave Hanlon.

Dave never thought much about meeting his mate. He knew he was borderline asexual and was okay with that, not that concerned with labels. He had the pride of his job, his friends, and his pack. He’d never longed for more. Meeting Matt only enforces that belief. His wolf senses his mate, but Dave doesn’t feel a thing for the shy, sweet man.

Time together brings a new understanding for Dave, and perhaps a chance to get to know the blond who captured his wolf’s interest. But the unwelcome attention of a stalker makes Matt’s life a living hell all over again.

Will Dave and Matt be able to explore the new sides of themselves they are finding with each other, or will the stalker have the final say, ripping apart a fragile beginning?