Feel the Fire by Diana DeRicci 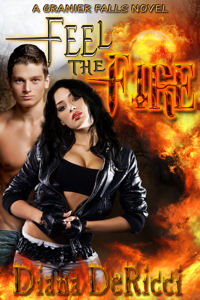 Rob's been working like the proverbial dog for months when he takes a trip to Granier Falls with his sister. Grateful for the break, he can't believe his good fortune when he meets Maddie. She’s playful, fun, unpretentious with a beguiling innocence and unlike any woman he's met in recent memory.

A long distance friendship soon turns into a torture of its own for Rob who shows up on her doorstep with nothing more on his mind than the hope of a wild weekend with the woman he can't forget.

Cursed from birth, both he and his sister share a trait that they can't explain, and have feared since their very power forced them out on the run. When there is a faint flicker of hope for a normal life, it crashes around him when his sister is yanked out of her home. Trouble from his past collides with the force of Maddie's over-protective family and Rob is faced with the challenge of a lifetime--save his sister, love Maddie, or lose them both.

All he wants is a normal life with Maddie in Granier Falls. But the truth about his power could ruin it
all before the end of the weekend.