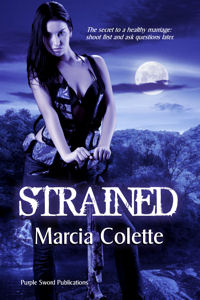 Loving wife, protector, werewolf hunter. It’s what I do.

Alexa is keeping a secret from her husband and being half werewolf isn't it.  After all, he’s a full-blood and doesn't care that there are those who think their union is an abomination. Despite their abnormalities, the Yorks have settled into suburbia and gone out of their way to look like the couple next door. Their ruse may have fooled an entire community, but not the Georgia Pack.

The Yorks have encroached on their territory. Most interlopers end up dead, especially when the bounties on their heads invite stalkers, killers, and psychos to collect. Despite the trouble the Yorks have brought with them, the domestic suburbanites have intrigued the pack.

Alexa’s less domestic than she seems. Eight months ago, her bounty hunting club disbanded after several team members lost their lives in an ambush. Since then, the club has reemerged and is expecting Alexa to take her rightful place among the ranks.

Keeping the truth from her husband about her extracurricular activities will strain the Yorks’ marriage and risk everything they’ve worked hard for. But, that’s the price Alexa pays when her deception becomes deadlier than her aim. A deception that also keeps her alive.