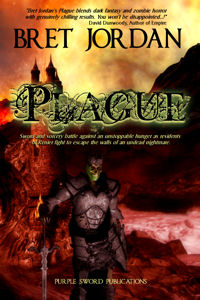 Sword and sorcery battle against an unstoppable hunger as the few living residents try and escape the walls of an undead nightmare.

Renier is a port city that stands as a glorious gem on the edge of the kingdom. The people are justly ruled by their beloved duke with the assistance of a benevolent wizard and a self-involved priest. Within twenty-four hours everything changes as a small group of strange lepers enter the port and cause a mysterious and deadly illness to rage through the city, killing most of the residents. Violent illness and gruesome death isn’t the end of the horror for the residents of Renier. Not by a long shot, as thousands of dead bodies rise from the cobblestone streets in search of living prey.