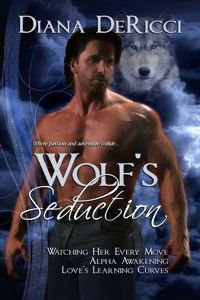 
Where passion and adventure collide... Three sexy wolf-shifter stories that will capture your heart in a twisted web of suspense, lust and true love. Howling optional. Includes the novellas: Watching Her Every Move, Alpha Awakening, and Love's Learning Curves.
WATCHING HER EVERY MOVE Agent Jonas Dreyer has been working night and day to intercept valuable memory chips before they are delivered into the wrong hands. A happily confirmed bachelor with good reason, he never expects for the woman who is struck by his suspect in a wild foot chase to be the one, his mate. Neither do they expect her to be targeted as the only person who may know where the vanished chips may be.
ALPHA AWAKENING An afternoon spent avoiding his sister places Rush Donovan on a collision course with Fate. Interrupting a possible violent disturbance brings him face to face with the one woman he never wanted to meet. His mate.
LOVE'S LEARNING CURVES Dario Acardi has enough stress in his life. His family is hounding him to marry, his father wants him to take over as head of the pride, and his cousin needs to borrow the car. All he wants is a little peace. But now that a certain cougar has decided Sheridan is the woman he needs, Dario has to convince her that what she believes isn't true at all. That size isn't what rules the heart. And perfection really is in the eye of the beholder.
Available for Purchase at:
Amazon
Barnes and Noble