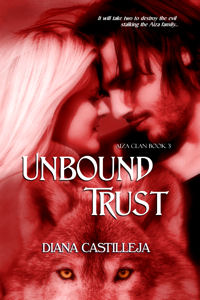 Brooke Aiza has returned home after staying with her Aunt Jerry for more than a year to learn she's an aunt herself by her brother, and her sister is married! Overwhelmed by the changes taking place with her siblings, she begins to feel more than a familial affection for her new brother-in-law, and sees no escape except to put distance between them until she leaves for her parent's home.


Mitch isn't interested in any woman, content with his life. Mostly. Even his brother senses a restlessness building within him, but for what? Then when Mitch suffers a major accident, he and Brooke are all but confined to the same house, and he is left trying to remember why he didn't want anything to do with women. Because the more he sees of her, the more he needs her kiss.


The resurgence of an amulet into the sibling's lives changes everything, for the amulet can control them all. It will take two to destroy the evil stalking the Aiza family, and if Mitch refuses to face his feelings and Brooke can't overcome her hesitations to form a deeper trust, the opening of the gates of Hell could be the result.