Swept Away by Diana DeRicci 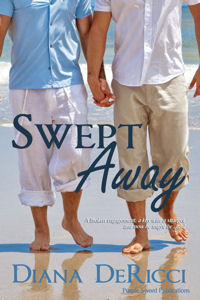 A broken engagement, a kiss with a stranger, and now he might be...gay?

Luke Fletcher’s engagement with Sandy has gone bad, and it was all his fault. He’d kissed a guy, and he’d liked it. Luke thinks he can move on and write it off as the drunken, bachelor-party prank it was meant to be, until a virtual clone of Kissy-Face Guy shows up on his doorstep.

Seth Rusko has been a friend of Sandy’s brother for ages, so when he’s asked to drop off a box of Sandy’s ex’s stuff, he figures the least he can do is help the girl out. But he hadn’t planned on Sandy’s ex being so tongue-tyingly, breath-catchingly hot. Of course, being hot is irrelevant—the guy is clearly straight.

At least, he seems straight... until he tells Seth just what he did to cause the breakup... and until Seth remembers the last time he lost his heart to a straight guy who didn’t know what he wanted...