His Redeemer's Kiss by Diana Castilleja 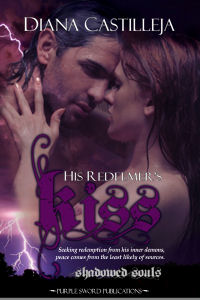 Seeking redemption from his inner demons, peace comes from the least likely of sources.

After existing for three hundred years, Joaquin Ramirez has fought the last nightly battle for his sanity. Rather than relinquish his tenuous hold on humanity, to not become the soulless monster that lives within him, he has decided suicide is a more honorable death. Until an unknown voice whispers from the darkness to literally shout at him—‘coward’.

Lily Jaspers is an enigma to Joaquin. A woman who has been abused, her internal pain shrouds her telepathic words. Yet she is living with, protected by, the very creatures Joaquin has no trust in—the Brethren. Maniacal and cruel, the Brethren are the vampire society as it is known, and feared, by humans. They are soulless beings who were once men of honor, like Joaquin. The one he faces who protects Lily is, in fact, the most adept and strongest he’s ever met. The whole situation intensifies when the home where he found the holder of the enchanting voice is attacked by a human force that leaves no doubt none were expected to survive.